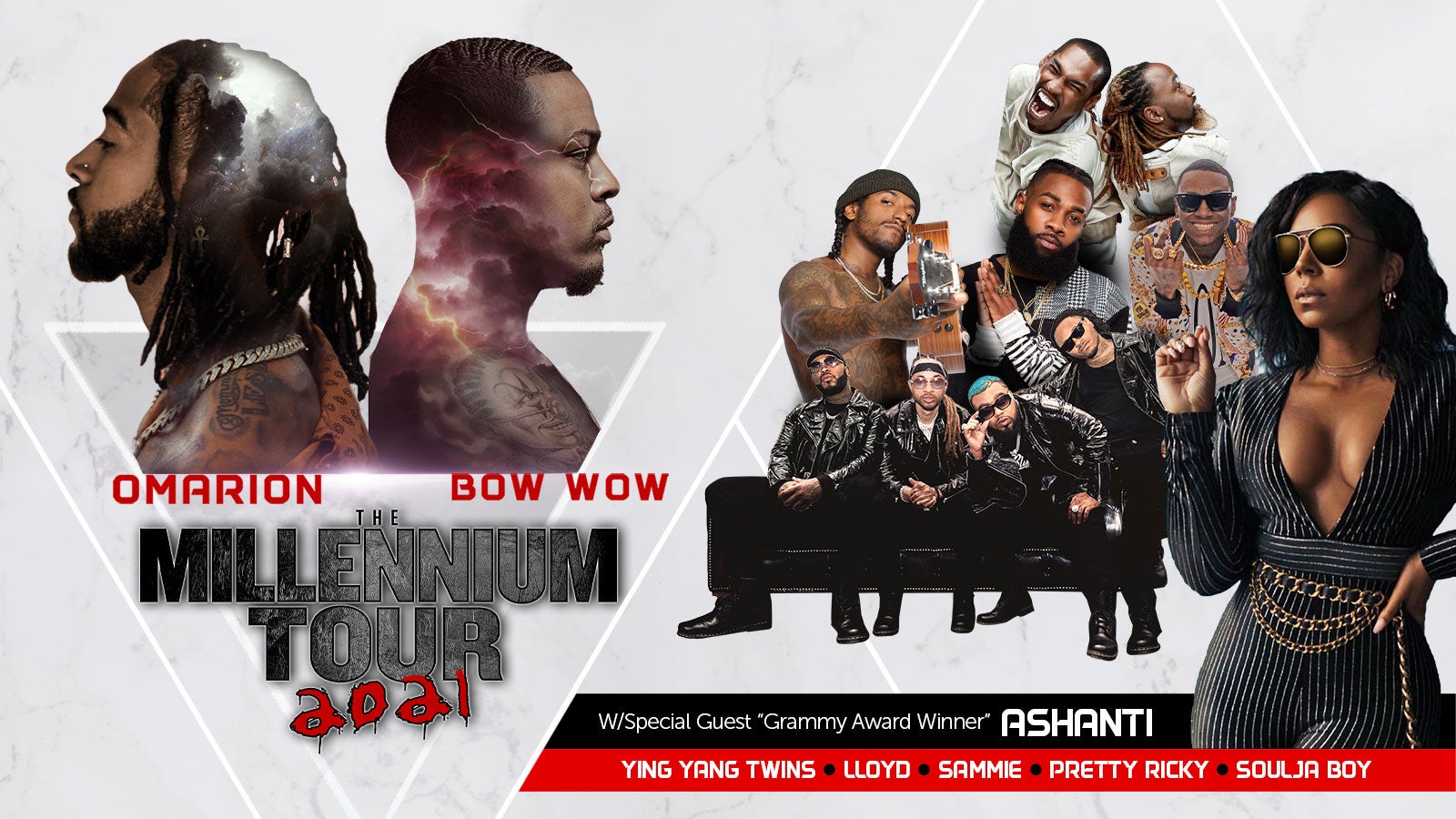 After The Millennium Tour 2019 had a successful run of sellout performances in arenas across the country, fans validated that R&B reunion tours are in popular demand and left many yearning for more. On the heels of The Millennium Tour’s success, G-Squared Events announced plans to return with The Millennium Tour again. This time, Omarion will be joined by fellow Face Off collaborator Bow Wow to relive their joint project back in late 2007. The lineup is full of nostalgic fan favorites from the 2000s.

For the last 20 years, Omarion has been a force to be reckoned with in the entertainment industry. With hit songs such as "Post to Be," the singer recently reflected on his unpredictable journey in the music industry. "2020 is my 20th year entertaining. Blood, sweat and tears. Always giving you the best that I got. Thank you for growing with me," he wrote. In 2004, Omarion embarked on a solo career and released his debut album, “O” in 2005, which debuted at the top of the Billboard 200 and received a Grammy award nomination for Best Contemporary R&B Album at the 48th annual Grammy Awards. His second solo album, “21” (2006), contained the hit single “Ice Box” which reached #12 on the Billboard Hot 100. Omarion also has notable acting credits in films such as “You Got Served,” “Fat Albert,” “Somebody Help Me” and “The Proud Family Movie.”

Bow Wow is best known as a record-breaking child rapper known as Lil Bow Wow who captured the hearts of young girls worldwide. Bow Wow released his debut album, “Beware of Dog,” in 2000 with hit singles, “Bounce with Me” featuring Xscape, “Bow Wow (That’s My Name)” featuring Snoop Dogg, “Puppy Love” featuring Jagged Edge and “Ghetto Girls.” Bow Wow also made his first movie appearance in “All About the Benjamins” in 2002 as a cameo. In the same year, Bow Wow made his debut as the lead role in “Like Mike.” He later began to undertake lead roles in movies, such as “Johnson Family Vacation” in 2004 and “Roll Bounce” in 2005. He also played a supporting role in the film “The Fast and the Furious: Tokyo Drift” in 2006. Bow Wow also appeared in five episodes of the television series “Entourage.”

Lloyd is an R&B singer, songwriter, rapper, dancer and actor. Lloyd embarked on a solo career in 2003. In 2004, Lloyd released his solo debut single "Southside" and the single quickly charted on the U.S. Billboard Hot 100 and became a Top 40 hit. Lloyd had a television acting role in 2005 on the UPN show “One on One” and in 2019 he debuted his film acting skills as Gregory Williams in TV One's original biopic, “The Bobby Debarge Story.” In March 2019, Lloyd joined an all-star lineup of early-2000s artists for The Millennium Tour 2019, which quickly became one of the year's most popular shows.

Sammie is best known for his hit single "I Like It" from his debut album “From the Bottom to the Top” (2000). After taking a hiatus from the music industry to focus on school, the singer graduated at age 17 in 2005. His second studio album “Sammie” (2006) debuted at #42 on the Billboard 200 chart. The first single "You Should Be My Girl", featuring YoungBloodZ member Sean P, peaked at #26 on the Top R&B/Hip-Hop Songs chart, while the second single "Come with Me" peaked at #23 on the same chart. In 2008, Sammie was featured on rapper Soulja Boy's hit single "Kiss Me thru the Phone" which peaked at #3 on the Billboard Hot 100. In 2012, he co-wrote the song "Next Breath" for singer Tank's fifth studio album “This Is How I Feel.”

Returning to The Millennium Tour 2020 stage, Pretty Ricky hails from Miami, Florida. The group enjoyed its biggest success in the mid-2000s with their gold-selling albums “Bluestars” and “Late Night Special” as well as the platinum singles "Grind with Me" and "On the Hotline."

Soulja Boy is an artist, record producer, actor and entrepreneur. In September 2007, his debut single "Crank That (Soulja Boy)" peaked at #1 on the U.S. Billboard Hot 100. The single was initially self-published to the internet and later became a #1 hit in the U.S. for seven non-consecutive weeks starting in September 2007.

Based in Houston, Texas, G-Squared Events produces high-quality live entertainment experiences with some of the world’s biggest performers including Charlie Wilson, B2K, Tyrese, Steve Harvey, Keith Sweat and Brian McKnight. For over 20 years, G-Squared Events has leveraged data-driven insights with our event production expertise to deliver world-class events while earning enduring loyalty from our patrons, artists and venue partners. G-Squared Events was recently recognized as one of the top independent promoters, at #30 on Pollstar’s Quarter Two 2019 Worldwide Top 100 Promoters chart. To learn more, visit www.GSquaredEvents.com.

As our partners at Water Street Tampa continue to develop the 60 contiguous acres in the neighborhood surrounding AMALIE Arena, we ask for your patience and consideration when planning your visit to cheer on the Lightning or enjoy a concert or family show. We are pleased to report that the development project is well underway with a hotel and USF Health's Morsani College of Medicine in the midst of construction while we expect to see groundbreakings on several other projects. Roadways are being realigned, traffic patterns are changing and new transportation options are emerging - all with a vision of creating a more user-friendly environment in the blocks surrounding AMALIE Arena.

As you plan your trip downtown, we aim to keep you informed of these new developments, offering you all you need to know about arriving at AMALIE safe and on time for your event.

For the quickest arrival and departure, we suggest the following parking options.

The following items cannot be brought into AMALIE Arena events:

Keep in mind that AMALIE Arena will utilize a variety of search techniques at all entry points. Thank you for your cooperation.

Discover all of our in-arena dining options below.

About Saturday night... what a show! Happy birthday, @smallboneluke 🥳
Taste like…a beautiful day for @harrystyles to perform in Tampa! 🍉
POSTPONED: a statement from the tour, "The “Legendz of the Streetz” Tour will be one of the most iconic tours of all time and to ensure that the show is bigger and better for the state of Florida, we are rescheduling our Tampa, FL date from Sunday, October 17 to Friday, November 12, 2021. All tickets bought will be honored for the rescheduled date. We can’t wait to see you there."
SHOW ANNOUNCE - @toolmusic will perform here on February 9 with @blonderedheadofficial! Tickets go on sale this Friday at 10am. #TampaIsLIVE
JUST ANNOUNCED - @usfmbb will take on Auburn University at Amalie Arena on November 19! Get presale tickets now through tomorrow at 10pm. Link in bio.
@ericclapton is live in Tampa! 🎸
On this day in 2015, @janetjackson brought her Unbreakable World Tour to Tampa 🤍
JUST ANNOUNCED: @shawnmendes is bringing Wonder: The World Tour to Tampa's Amalie Arena on October 11, 2022. Tickets on sale Thursday, October 7. #TampaIsLIVE
On this day in 2019, @officialthewho brought their Moving On! Tour to Tampa 🎸
that face when you say it’s your *last one* but not really. hey, from Bolts Brew Fest 👋
TSO is on sale now! 🎸 (link in bio) #TampaIsLIVE
Happy birthday, @nickjonas 🥰
On this day in 2018, Scorpions brought the Crazy World Tour to Tampa 🎸
@teddysphotos performed in Tampa this week, almost 6 years to the day from his 2015 performance on the x Tour!
HOLD ON and get ready to see @justinbieber at the VMAs on September 12! Grab your tickets to see him here on April 9. Link in bio #TampaIsLIVE
SHOW ANNOUNCE - @evanescenceofficial and @halestormrocks are coming to Tampa on Nov. 30! Tickets go on sale this Friday at 10am. #TampaIsLIVE Want early access to tickets during the presale? Signup for our newsletter at amaliearena.com/newsletter to receive a code.
Happy birthday to one of our recent guests, @kattwilliams! 🥳